Josh Angrist and the Search for Truth

“There’s no such thing as a research emergency,” one of my old bosses used to say. Try telling that to Josh Angrist, one of the 2021 winners of the Nobel Prize in economics, which he shared with David Card and Guido Imbens. When I was working closely with Josh and living in Cambridge, my then-boyfriend, now-husband quickly learned that if my cell phone ever rang before 8:30am or after 10pm, there was only one person who could be on the phone: Josh.

What drove these early morning urgent phone calls about running the computer code for just one more regression analysis? An incessant need to search for truth, and to do so now.

Josh’s work has two main strands. The first develops tools to derive evidence — “truth” — from naturally occurring phenomena in the world. This is the work for which Josh won the Nobel (or rather, since we are being precise here, the Sveriges Riksbank Prize in Economic Sciences in Memory of Alfred Nobel). The second strand applies those techniques to the real world, in many cases in the context of economics of education.

My trial by fire came from working with Josh on a project determining the impacts of Boston charter schools on test scores while employed as a research manager at a center at Harvard. I was a recent Swarthmore grad when I met Josh, and he used to tease me about how he didn’t get in (because he was too busy smoking a lot of dope), and went to Oberlin instead. I told him he was in good company.

Somehow, I must have passed the test, because I became his coauthor when the project continued while I was a PhD student. We used econometric tools that Josh developed to estimate the causal effect of attending a charter school. Using charter school lotteries that are used to admit students, we compared those who were offered a seat at the charter with those who were not, also accounting for who actually attended a charter. (If you want to see how Josh explains it, you can watch this video.) 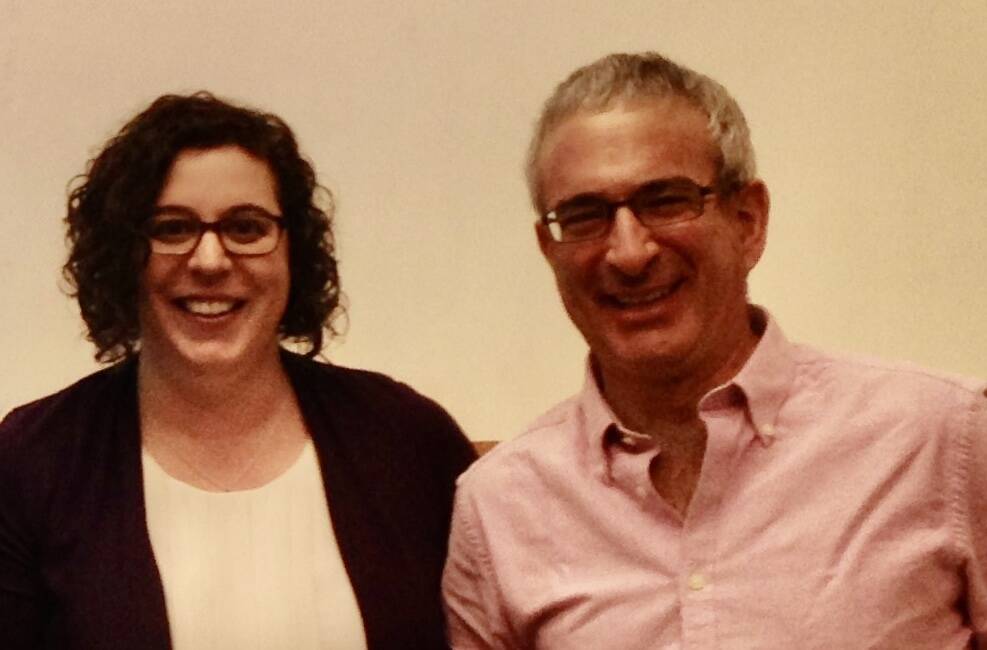 Sarah and Josh pictured after an event.

We found that Boston charters raise standardized test scores, and lift 4-year college attendance as well. Lest you think this is a case of economists elevating results only that confirm the benefits of market influences, other work by Josh and coauthors shows that traditional public schools with similar flexibility as charter schools (“pilots”) do not boost test scores, and that some charters reduce test scores.

In the search for truth, as shown by his work on charters, Josh is non-ideological and willing to debunk conventional wisdom. Think of all the ink spilled in the New York Times on selective high schools like the famous Stuyvesant. When most people think of these types of schools, they often think of them as engines of learning, propelling students to new educational trajectories that will help them access the American Dream.

You might be surprised to learn there is little evidence that these schools improve test scores or, more importantly, boost college-going or college selectivity. But Josh’s careful research with coauthors, which compares students just above the threshold of the admissions cutoff, to those just below, shows exactly this: attending an exam school in New York City or Boston does not change students’ educational trajectories. Looking at a similar question in Chicago, Josh and coauthors found that attending an exam school under an affirmative action scheme actually decreased math scores, because it diverted students from some high-performing charter schools, similar to those we studied in Boston.

Josh is willing not only to debunk conventional wisdom, but also to readily debunk his own research. Using the same technique he would later apply to exam schools, in a paper from the late-1990s, Josh and Victor Lavy compared students in grade cohorts just above and just below a cutoff for a class size rule (inspired by a medieval Jewish scholar’s rule for group size when studying the Torah). They found that when the rule induced students into smaller class sizes because of a requirement to add a teacher when the cohort size was above the threshold, test scores increased. Revisiting this technique almost 20 years later, an update to the paper found no such evidence of score gains due to smaller class size.

The search for truth is not always an easy path, and what gets anointed as truth, either by intuition and sometimes by early evidence, is not always the final answer. There are also questions of whose truth is elevated in conventional research designs. Josh not only searches for truth in his own work, but has committed to preparing a whole generation of economists to join him in the search, through his teaching, his papers, and his textbooks and video lessons. And he has succeeded. Some of his own work documents the spread of empiricism in modern economics research.

For my part, the spine of my copy of Mostly Harmless Econometrics is now broken, having referenced it so many times when coding or writing up a paper. And when I am sitting at my desk teasing out relationships in my data, or trying to craft the perfect sentence to convey a point, or deciding how to explain a tough concept to my students, I often think of my teacher and now colleague, Josh Angrist.

“What would Josh do?” And then I think about the counterfactual, strike one more adverb from my sentence, or find a real world example to inspire my students.

Building truth is a slow process: Regression by regression, paper by paper, talk by talk, student by student. A presentation to research partners or policymakers, a quote in the newspaper. Sometimes, especially recently, it seems like evidence does not matter and it will never change anyone’s mind.

But the quest for truth is not quixotic. A recent experiment with mayors in Brazil showed them policy-relevant evidence and found both that the mayors updated their beliefs about the policy and were more likely to implement it. Maybe if we work hard enough to uncover truth, and to communicate it, evidence will find its way.